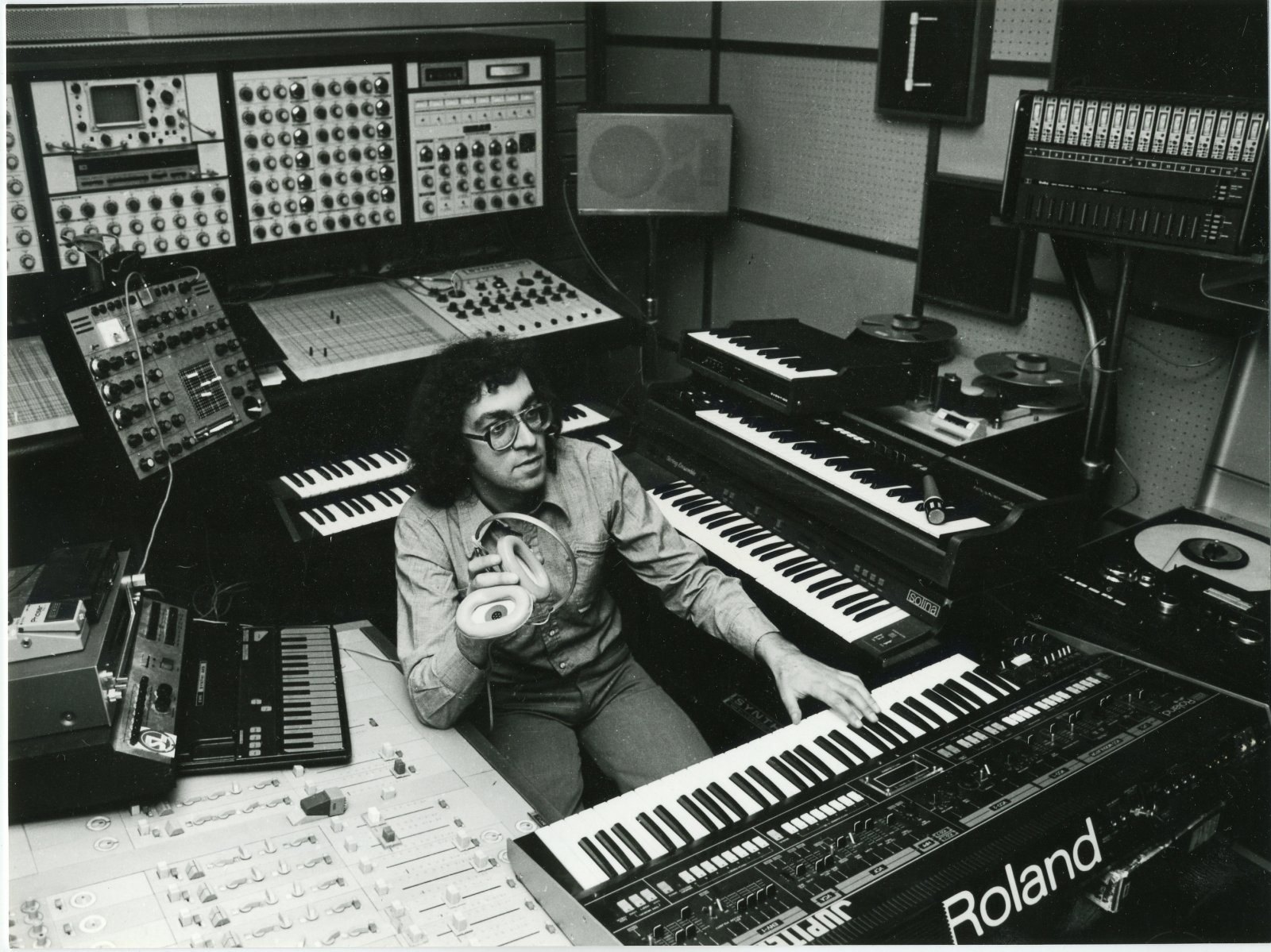 Pioneers of electronic music can take on any form. Some seem to have come straight from the cosmic wilds of the Milky Way, while others explore the hypnotic power of robotic sound. Still others experiment with conceptual sound forms. The possibilities opened up by new technologies since the mid-20th century are endless. Whatever we personally think of electronic music, it’s become part of our lives, not just as a genre, but as a technology responsible for creating the sounds all around us. For decades now, a huge part of our auditory environment (songs, film music, commercials, and ringtones, to name a few) has been created not in the old-fashioned way – by walking into a studio with an entourage of people and instruments in tow – but with the help of software and applications.

For many of us, electronic music in Bulgaria can be traced back to the early years of Metropolis, and the street parades at the beginning of the millennium, when young electronica fans from all over the country braved the streets and concert venues of Sofia, causing a stir with their appearance, energy and behavior. But the history of electronic music in our country goes back long before that.

“THE FATHER" OF ELECTRONIC MUSIC IN BULGARIA

Prof. Eng. Simo Lazarov is now in his early 70s. Even at this respectable age, he still has a passion for electronic music. His name invariably pops up when digging through the "archives" of the genre in Bulgaria, and is always linked to the epithet "the father of electronic music" in the country. In addition to nine theoretical books on the subject of electronic and computer music, he maintains a huge but well-systematized archive of memories, photos, posters, album covers and stories, which he began putting into writing after his last major birthday. He has planned this latest project as a seven book series, the fourth of which is due out in the middle of this year.

He was born in Sofia in 1948, into the family of violinist and conductor Leon Lazarov. His musical ear was nurtured from an early age; he began playing the piano at age 5, and has been performing onstage since the mid-1960s in various groups, including Mladost (“Youth”) and Vezni (“Libra”).

"I've been playing since I was little, and I was somehow drawn to the technology, but as a student there were no opportunities to do this. At some point I got a record from America through a family connection, my uncle: the most famous electronic composers of the 1960s.” At the time, Lazarov was only in 5th or 6th grade and these "never-before-heard sounds" made a lasting impression.

In the early 1970s, he started working at the Bulgarian National Radio, where he was involved in setting up the first electronic music studio in Bulgaria. It officially opened in 1973, and in its early years it housed a huge synthesizer the size of a room. At the time, only BBC London and Radio Belgrade had similar studios, says Lazarov, who has served as its managing director for 25 years, and the studio “spewed incredible amounts of work.”

One living trace of Lazarov's contribution to electronic music is the famous and beloved (and for some, hated) radio signal, the "Early Morning Rooster," which, according to his calculations, has signaled every weekday morning for the past 45 years that it is time for children to wake up and go to school. For several generations born since the 80s, that sound is unforgettable.

In the early days of the studio's existence, Lazarov needed to spend 2-3 hours at the synthesizer to produce a single sound, and if he wasn’t happy with the result, he had to start over. At the end of the work day the machine forgot what it had been working on, and the next day everything had to started over from scratch. “There were two matrices –with two sets of 3,600 jack holes. If you wanted to remember a certain sound, you would write down which jack had been inserted, which matrix it was on, and the level of the corresponding potentiometer. That's how sounds were saved. These were analog devices, transistors that weren’t temperature stabilized and lost their parameters from day to day, and then the sound would change within certain limits. Ultimately it might turn out better the next day, but the real problem was lack of time: too many concerts, too much work, and two small children at home.”

This was a brand new tool and everyone wanted to get their hands on it. And so, the first electronic club was born, where every Thursday, "forward-thinking people with shared interests, including schoolchildren and students," got to hear what it was all about. Then, every Monday, they would gather to experiment. The results of their work were broadcast as a five-minute clip during the 12+3 radio program, “which lasted 15 minutes, and then at 5:30 p.m. a recording of all the music was played.” Soon, the electronic music club expanded beyond Sofia, with affiliate groups cropping up in Plovdiv, Shumen and Burgas.

Even then, Lazarov was familiar with the work of Tangerine Dream, Kraftwerk, Jean-Michel Jarre and Brian Eno, among others. Although in the West, this type of electronic music was already reaching a broader audience, in our country the critics with their "ossified understanding of the development of music" and "lack of criteria for thinking about the new" defined it as "dehumanizing", he also recalls.

With the emergence and subsequent development of personal computers in Bulgaria in the 1980s, Lazarov took a strong interest in digital sound, which had little to do with our current notions of digital sound. The process of extracting it was quite complicated. As the book Computers and Music (State Publishing House Tehnika, 1989) by Simo and Emil Lazarovi makes clear, it was an extremely time- and labor-intensive activity. The book describes one of the first sound synthesis programs, Music V, created in 1967-1968 in the Fortran IV language. In this program, music became a complex mathematical scheme of numbers and letters denoting notes and timbres. The book also discusses the capabilities of the Pravets 82, Atari and Apple microcomputers, which were more advanced for that time; the 8-bit Amstrad and Commodore, which were specially built for music performance; as well as various synthesizers, expanders, sound processors, rhythm computers and "sound discretizing tools” – samplers. And the sample codes of seemingly endless letters and numbers, as well as technical diagrams and sound tables and algorithm configurations in the book, usually reproduce works by Bach.

“THE CHILDREN" OF ELECTRONIC SOUND

As the 90s got underway, both devices (hardware) and programs (software) for music continued to develop and facilitate the production process, but in Bulgaria the electronic music scene had yet to emerge. One of the most famous Bulgarian producers in the world, Strahil Velchev – KiNK – cut his teeth on trance and progressive house trends from around the world, taking an interest in the electronic music scenes of New York, Chicago, Detroit, London, Berlin and Amsterdam. According to him, it is precisely this absence of a native tradition that has made him a more diverse artist, who to this day has a cult status among fans of electronic music. This is proven not only by his commercial success, but also by his longstanding position in the top five of the famous global electronic music platform Resident Advisor in the live performer category, because of the overall experience that his sets provide, in which he creates music live in front of an audience. 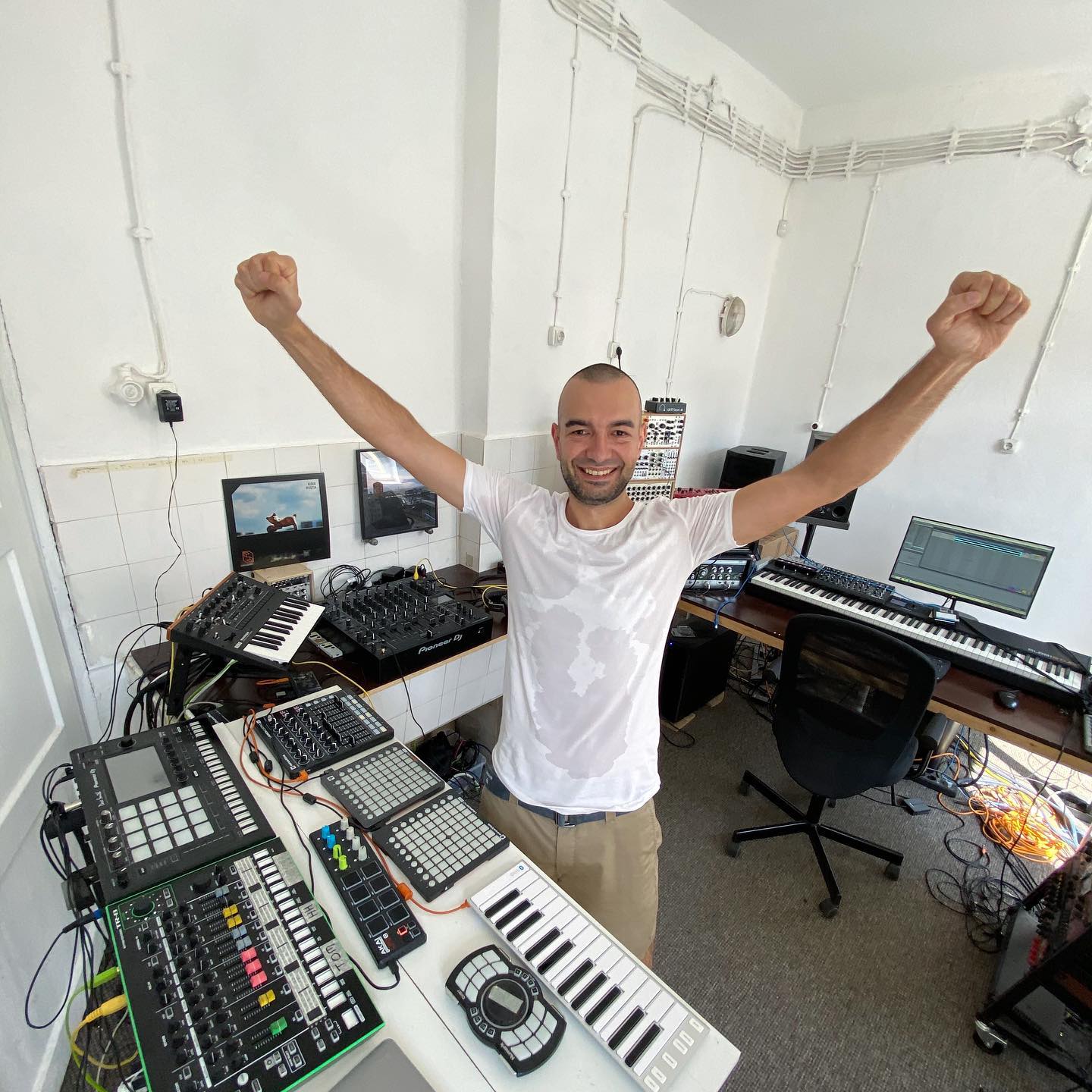 For him, however, digital precedes analog sound extraction, although he is known to have a predilection for combining the two and relies on a large supply of "gadgets" of both the digital and analog variety. The reasons for this are entirely financial.

"In the early 1990s, goods imported from the West were still expensive, and a record, for example, could cost as much as a quarter of my mother's monthly salary", Strahil told StoneRoads.com in 2015.

The most accessible source of new music was the radio, where more underground electronic music began to be played sometime around 1993. Therefore, mixtapes were all he could afford, and although he had to wait 2-3 months to satisfy his craving for new beats and sounds, he associates this period not with negative feelings, but with the great excitement of immersing himself in new music. At first he would use elements from these mixtapes, re-recording them on blank cassettes and making his own edits, which, although not new, were "something new" for him.

He credits his first professional efforts in the studio to Konstantin Petrov from the DJ collective Porno BPM, with whom Strahil and his friends gained experience as resident DJs in various venues around Sofia before KinK launched on the international scene. He met Konstantin in 1997 in a music store and the two became close, and the following year he also introduced him to the Jeskola Buzz software platform. In fact, all these technical "limitations" made him all that more creative, and he quickly learned to achieve the results he wanted with what little was available him. His strength lay precisely in the ability to play with technology, and even now, when one of his "gadgets" fails him at a performance somewhere in the world, he always manages to make his two-hour set unforgettable anyway.

With the start of the new millennium, when KinK sent out his first CDs with original material to various labels, an authentic electronic scene finally appeared in Bulgaria, with big parties organized by Metropolis, the main promoters of this style of music. In 1999, on the tenth anniversary of the first techno party The Love Parade in Berlin (which took place five months before the fall of the Berlin Wall), the first Street Parade was organized in Sofia. Like its famous predecessor, it was attended by a diverse crowd of young people keen to express their freedom, with techno as their soundtrack. 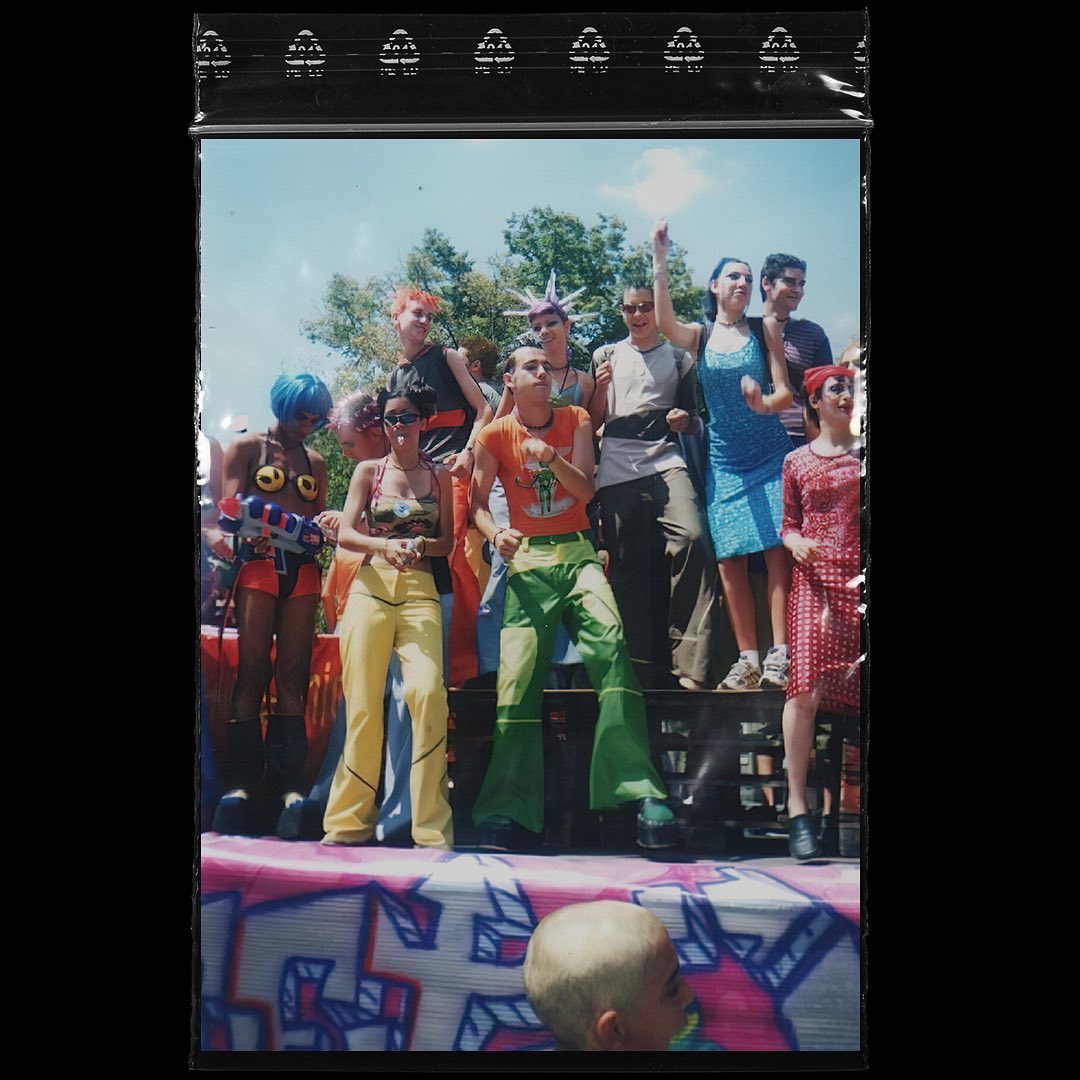 Visual artist Vladislav Iliev – a.k.a. Vladzen – set out to locate and digitize all available audio, video, printed, photographic and visual materials from the turn of the millennium, the peak of the electronic music scene in Bulgaria (1999-2001). This was when clubs like Spartacus, Chervilo, Yalta, Blaze, Fader and Indigo laid the foundations for this renaissance. Vladzen’s idea for creating the Bulgarian Rave Archive is not just about nostalgia for the years when trains to the capital were overflowing with colorful and diverse people with unusual outfits, make-up and hairstyles whenever there was a big electronica party, but also the belief that all of this tells an important story about the difficult transition to democracy, one that is still ongoing. The project was first presented through an interactive exhibition at the end of 2021, and now it has its own digital home, which Vladzen will keep building and improving. One of his ideas is to publish a print version, because the connection between generations should not be lost; after all, in order to understand the “now” we must first come to terms with the “before.”