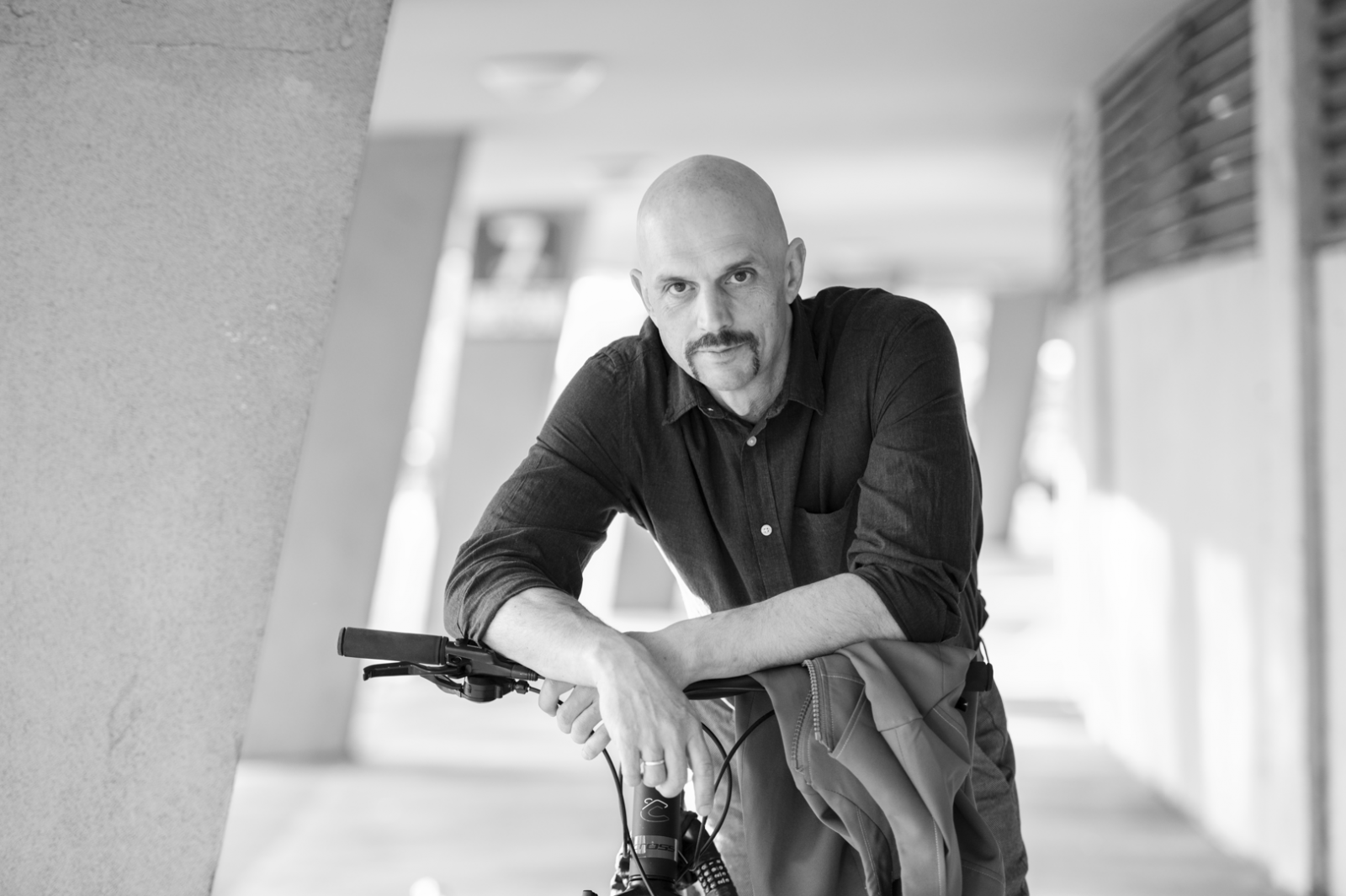 Todor Karastoyanov has deep connections to the stage but he does not like the spotlight. He is part of at least one project you may have heard live whose members prefer to remain anonymous. He plays for (or has co-founded) the bands 3TELETA, Lacrima Christi, Animatsionerite, Nasekomix

Todor Karastoyanov has deep connections to the stage but he does not like the spotlight. He is part of at least one project you may have heard live whose members prefer to remain anonymous. He plays for (or has co-founded) the bands 3TELETA, Lacrima Christi, Animatsionerite, Nasekomix (and various others); he has composed music for several short films, and co-authored the Nasekomix song "Inzhektirai me s lyubov," which was included in the soundtrack for Eastern Plays by Kamen Kalev. He also translates and writes articles, essays and screenplays. He has a degree in Theater Studies from the National Academy of Theater and Film Arts, has worked as a theater critic, was the host of the show Theater Fetish on RFI, but says that it was always hard for him to hide his contempt for theater. "I saw it as a servant who can please the eye, thanks to some authentic charlatan practices, but who cannot be relied because he could  mess up at any moment." He believes that the contemporary music scene needs blood, sweat and tears, adding that: "People are fascinated by the overall democratization of musical instruments and recording technologies. Never before has it been so technically easy to express yourself through music as it is today. The artist and the audience have never this accessible to one another. Discipline and empathy are the equivalent of the thoughts and prayers we need so that this accessibility can survive in our fragmented present and possible future." 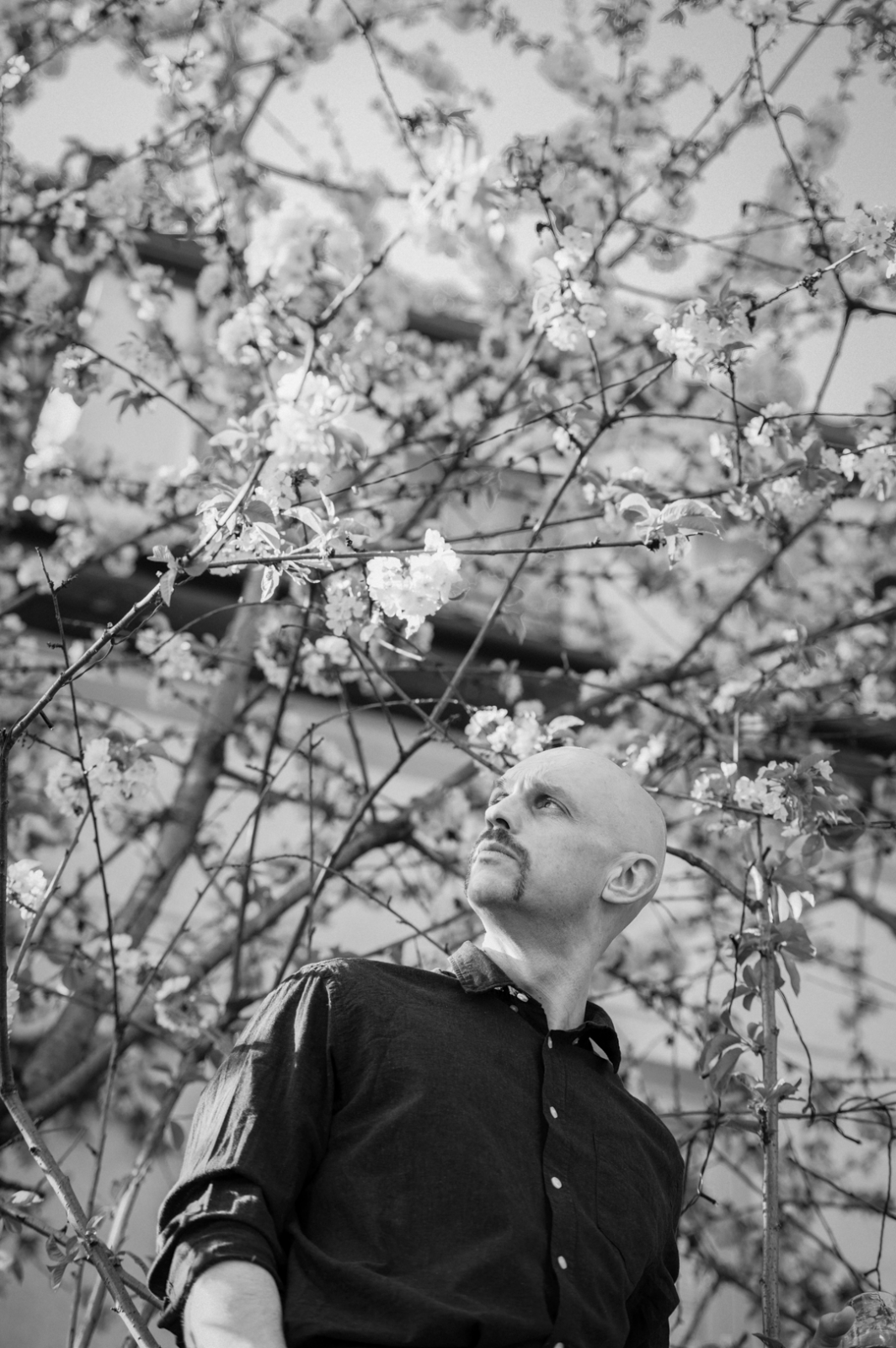 You set foot on the underground scene in the late 80s. How did music capture the spirit of the times back then?

It was a time of hope in zero gravity. I think I joined when it was already limping, right when Bulgarian music had no desire to capture anything anymore, let alone some kind of spirit. At the head of it all was the popular estrada, which lazily tapped its hooves in the general direction of the pink clouds, and simply kept up the old habit of stealing from its Italian and French colleagues, presenting the result as works of art. After that, the newborn protest rock was throwing fists and hairstyles around to the delight of party bigwigs from the cultural censorship bureau, who finally had someone to drop their impotent bureaucratic axes on. And, of course, the orchestral avant-garde, locked in its tower high above socialism, cotton stuffed in its ears, lest some erroneous tone-slogan should accidentally distract it from its porcelain hermeticism. We didn't know much about it anyway.

Maybe this was the spirit of the time – low atmospheric pressure with a slight Balkantourist breeze and negative wind of change.

The beginning of the 90s was like a clogged pipe, which the municipality finally agreed to repair. We were flooded with both fresh culture and charlatanry, and all sorts of influences shaped us into little harmless Frankenstein-style offspring. Our music wanted to be everything, but with more distortion. By the mid-1990s, I realized that I needed to go on a music diet if I didn't want to end up needing brain liposuction. Throwing yourself from style into another was disgustingly energy-intensive, all that I got from it was a good ear for hearing the dedication of the artist regardless of genre. 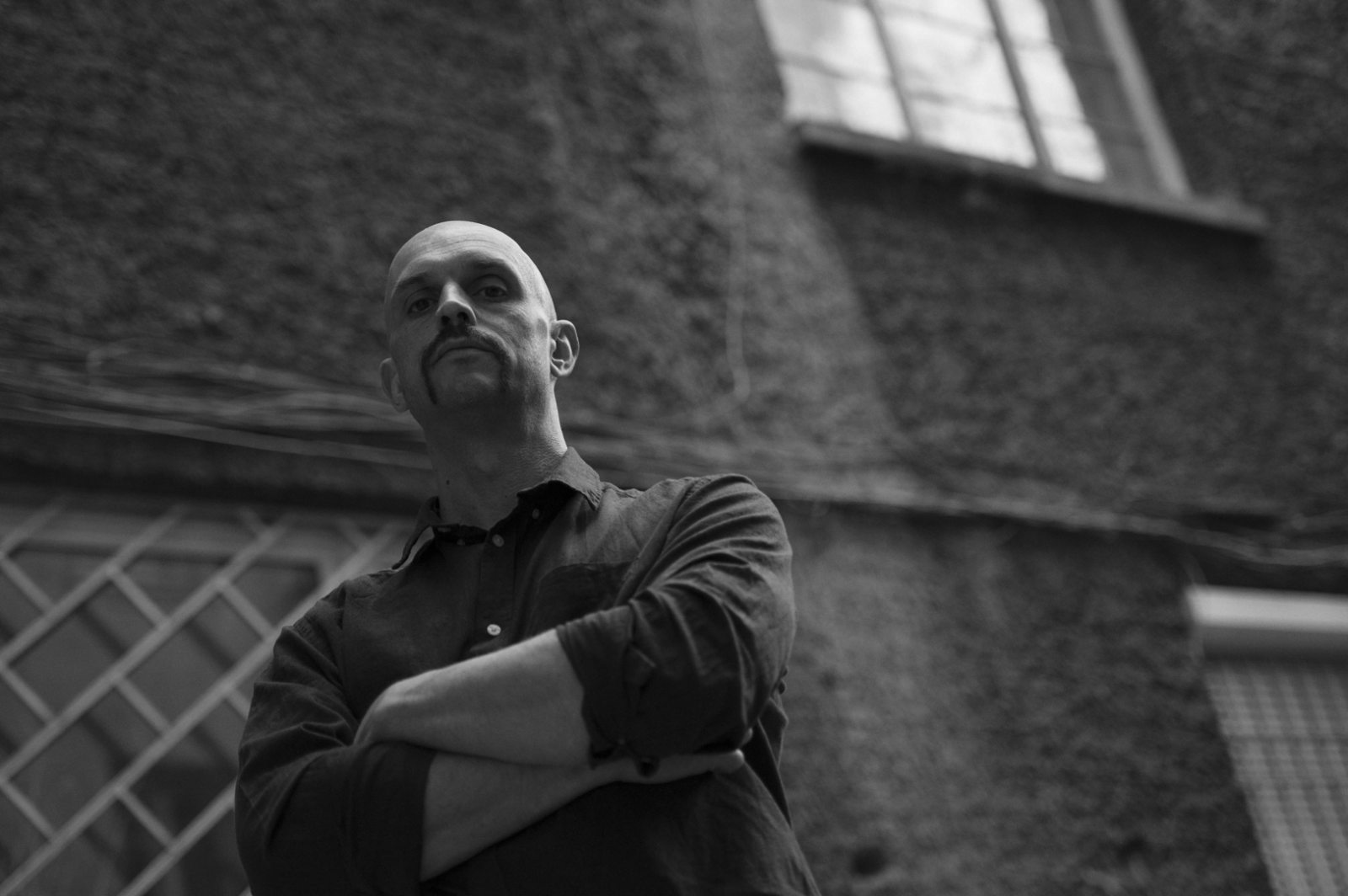 Do you think there is a real underground music scene today, or is it a concept from a bygone era?

The only thing our country had that was close to an underground were the Varna sailors, who would bring home the clap and western vinyl, which then spread around the country. There has never been a real native underground here. And due to a linguistic and economic slip, this label was later claimed by pop-folk, since the state security-affiliated mobsters were flattered when newspapers called them just that – underground. Something more like a real underground was formed briefly, at the beginning of the century, around experement.org, a Bulgarian-made website that came before Myspace, and allowed you to share files; there were several intense years of subcultural racing, which culminated in the nothing that's so typical for our geography. Na Tumno, before it became a successful chain of stores, was a festival in Varna, where you could see things that they didn't show on TV. There were sporadic flashes over the years, O! Shipka, punk, Interspace, electronic parties, lonely voices from below, the label mahorka.org. But the underground as a moving current and a relay race between artists has hardly ever existed, because the dominant philosophy here is "you can't tell me what to do!" The upside-down value system does not allow it. There have simply been and always will be some musicians for whom the meaning of the word compromise is too obscure. It might be too late for the underground now, now it's time to expose.

You are part of cult bands such as 3TELETA, Lacrima Christi, Animatsionerite, Nasekomix. What did each of them give you personally and professionally?

Music usually takes from you, it does not give. If you are not careful, it takes your head and heart, your lungs and liver suffer, your ears, nose, throat. Instrumental training is more like a gym workout with the diet all wrong. The mental training – I would not recommend to anyone. Music gives you friendships, but I would not sign my name under that statement, because many of them are deceptive. But beyond all these "ifs" and "hardly" – in every band I joined, I got to be the most of what I am, my little freedom with its big claims. That's what I took from it.

It is interesting that you studied drums in the Roma neighborhood in Yambol. Why did you choose this type of schooling? What does it offer that academic education cannot?

Roma are a force of nature and so is music. At a certain point, this equation is sufficient. You learn from the Roma that music comes from the ether, and that a space Rom was leaping in the hearts of Ravel and Shostakovich, and without him there would be no Ravel or Shostakovich. I don't have an academic background in music, but thanks to the Roma I was able to hear notated music intimately stripped of different conventions and eras. Besides, gypsies can easily do things that the entire pop and rock infantry can only dream of. They are pimps of rhythm and dealers of eternal harmonies. 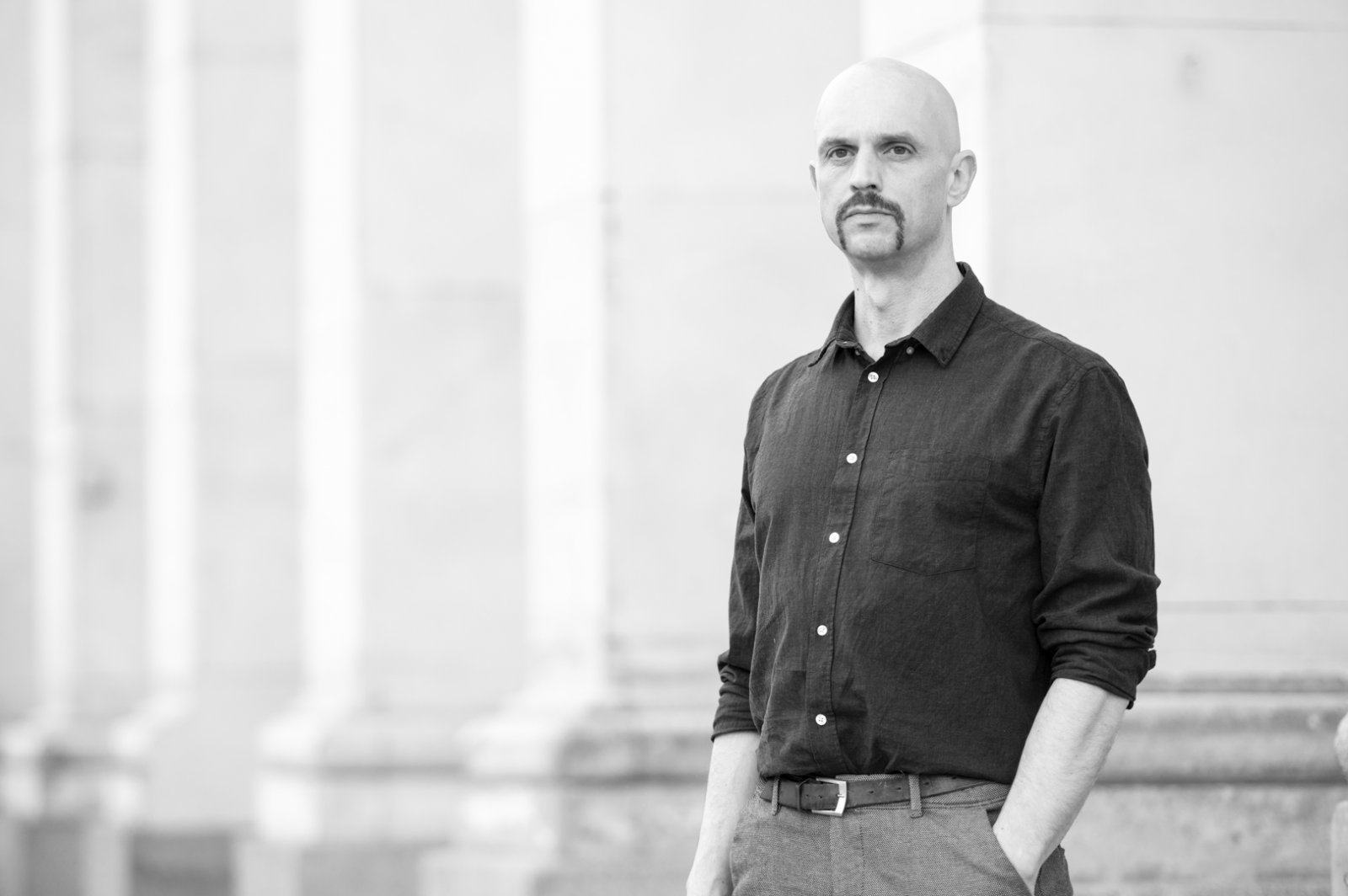 I've wandered a lot over the years. Searching for the key to everything in Bulgarian folk music, skinny-dipping in the ocean of twentieth century orchestral music, Roma, Black, white, multicolor music. In the end, there is only one revelation: music is those strong personalities who somehow never learned that "it can't be done that way" and "this won't work" and soldiered right ahead.

You worked on a cover of Jane's Addiction, with Maria Virhov on vocals (better known as a poet and translator, 1969-2011). How did she connect the world of music and literature, and what is the most valuable thing she left for them?

It has always bothered me that in our country few people pay attention to the message, if we leave aside the rare exceptions. They applaud you as long as you finish the song without messing up the notes. Musicians are embarrassed to say something, the audience is embarrassed to hear it. It was the other way around with Maria – nothing could stop her from scream-punching a message into your amygdala. Maybe that's why, growing up, her natural environment was the Novosibirsk punk scene. She was a Babel fish of musical word order, translating Mandelstam and Nick Cave with equal fervor. Working with her taught me that poetry and lyrics are two different genres. She managed to leave behind her message. For me, the scary question that remains is why most people here are content with so little, with just the shiny shell. Now I hold on to the little bright flashes – young artists who grasp this organic connection and are not content to be mere hollow resonator boxes. 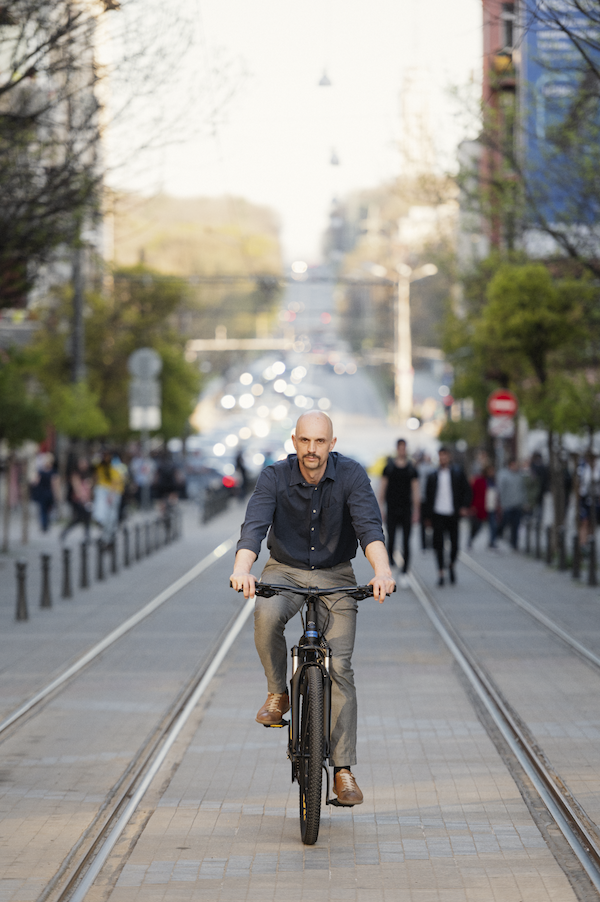 In recent years you have been working on projects related to ecology and politics. Why are these topics important to you and do they relate to music in any way?

Art has a nasty property of fitting into the mold of all kinds of ideologies and feeling comfortable there. Art that supports violence, oppression, the cult of the strongman, war, hatred – is not at all uncommon. Don't ask art to show common sense, because it will retaliate with massive schizophrenia. Don't ask it to be pure, because it will deliberately drown you in the most rancid septic tank.

Yes, music can be the glue binding concepts that seem quite distant from it and from each other. It is tempting for me to indulge this fantasy. But I know that music can't make things sustainable. Politics will drag ecology into hell, and all the great achievements of humanity will follow, devalued into a pile of sand.

Music is easy – after the ecological apocalypse simmering on the periphery of our precious attention, a single human voice and two hands will be enough to bring it back. Politics, economics, civilization will be in a coma long after. That's why it's good for someone to sing something about this subject, so that the stones can't whisper mockingly over our remains: "And where were you when you weren't being yourselves!"